Your No1 Choice For Paramotoring & Microlight Aviation

1.  PURPOSE.  This advisory circular (AC) is intended to alert
pilots to the hazards of aircraft wake turbulence and recommends
related operational procedures.

3.  INTRODUCTION.  Every aircraft in flight generates a wake.
Historically, when pilots encountered this wake in flight, the
disturbance was attributed to "prop wash."  It is known, however,
that this disturbance is caused by a pair of counter rotating
vortices trailing from the wing tips.  The vortices from large
aircraft pose problems to encountering aircraft.  For instance,
the wake of these aircraft can impose rolling moments exceeding
the roll control capability of some aircraft.  Further,
turbulence generated within the vortices, if encountered at close
range, can damage aircraft components and equipment and cause
personal injuries.  The pilot must learn to envision the location
of the vortex wake generated by large aircraft and adjust his
flight path accordingly.

4.  VORTEX GENERATION.  Lift is generated by the creation of a
pressure differential over the wing surfaces.  The lowest
pressure occurs over the upper wing surface and the highest
pressure under the wing.  This pressure differential triggers the
rollup of the airflow aft of the wing resulting in swirling air
masses trailing downstream of the wingtips.  After the rollup is
completed, the wake consists of two counter-rotating cylindrical
vortices (see figure 1).  Most of the energy is within a few feet
of the center of each vortex, but pilots should avoid a region
within about 100 feet of the vortex core.

5.  VORTEX STRENGTH.  The strength of the vortex is governed by
the weight, speed, and shape of the wing of the generating
aircraft.  The vortex characteristics of any given aircraft can
also be changed by extension of flaps or other wing configuring
devices.  However, as the basic factor is weight, the vortex
strength increases proportionately with increase in aircraft
operating weight.  Peak vortex tangential speeds up to almost 300
feet per second have been recorded.  The greatest vortex strength
occurs when the generating aircraft is heavy-clean-slow.  Figure
2 shows smoke visualization of a vortex photographed during early
smoke tower fly-by tests.

6.  INDUCED ROLL: In rare instances, a wake encounter could
cause in-flight structural damage of catastrophic proportions.
However, the usual hazard is associated with induced rolling
moments which can exceed the rolling capability of the encountering
aircraft.  In flight experiments, aircraft have been intentionally flown
directly up trailing vortex cores of large aircraft.  It was
shown that the capability of an aircraft to counteract the roll
imposed by the wake vortex primarily depends on the wing span and
counter-control responsiveness of the encountering aircraft.

a.  Counter-control is usually effective and induced roll
minimal in cases where the wing span and ailerons of the
encountering aircraft extend beyond the rotational flow field of
the vortex.  It is more difficult for aircraft with short wing
span (relative to the generating aircraft) to counter the imposed
roll induced by vortex flow.  Pilots of short span aircraft, even
of the high performance type, must be especially alert to vortex
encounters.  The wake of larger aircraft requires the respect of
all pilots.

a.  Vortices are generated from the moment aircraft leave
the ground, since trailing vortices are a by-product of wing
lift.  Prior to takeoff or landing, pilots should note the
rotation or touchdown point of the preceding aircraft.

b.  The vortex circulation is outward, upward and around the
wing tips when viewed from either ahead or behind the aircraft.
Tests with large aircraft have shown that the vortices remain
spaced a bit less than a wing span apart drifting with the wind,
at altitudes greater than a wing span from the ground.  In view
of this, if persistent vortex turbulence is encountered, a slight
change of altitude and lateral position (preferably upwind) will
provide a flight path clear of the turbulence.

c.  Flight tests have shown that the vortices from larger
(transport category) aircraft sink at a rate of several hundred
feet per minute, slowing their descent and diminishing in
strength with time and distance behind the generating aircraft.
Atmospheric turbulence hastens breakup.  Pilots should fly at or
above the preceding aircraft's flightpath, altering course as
necessary to avoid the area behind and below the generating
aircraft.  However, vertical separation of 1,000 feet may be
considered safe.

d.  When the vortices of larger aircraft sink close to the
ground (within 100 to 200 feet), they tend to move laterally over
the ground at a speed of 2 or 3 knots.

e.  A crosswind will decrease the lateral movement of the
upwind vortex and increase the movement of the downwind vortex
(Figure 8).  Thus, a light wind with a cross-runway component of
1 to 5 knots (depending on conditions) could result in the upwind
vortex remaining in the touchdown zone for a period of time
(figure 9) and hasten the drift of the downwind vortex toward
another runway.  Similarly, a tailwind condition can move the
vortices of the preceding aircraft forward into the touchdown
zone.  The light quartering tailwind requires maximum caution.
Pilots should be alert to large aircraft upwind from their
approach and takeoff flightpaths.

a.  Remain in the touchdown area.

b.  Drift from aircraft operating on a nearby runway.

c.  Sink into takeoff or landing path from a crossing runway.

d.  Sink into the traffic patterns from other airport operations.

e.  Sink into the flight path of VFR flights operating at the
hemispheric altitudes 500 feet below.

f.  Pilots of all aircraft should visualize the location of the vortex trail
behind large aircraft and use proper vortex avoidance procedures
to achieve safe operation.  It is equally important that pilots of larger
aircraft plan or adjust their flight paths to minimize vortex exposure
to other aircraft.

9.  VORTEX AVOIDANCE PROCEDURES.  Under certain
conditions, airport traffic controllers apply procedures for
separating aircraft operating under Instrument Flight Rules.
The controllers will also provide to VFR aircraft, with whom they are
in communication and which in the tower's opinion may be
adversely affected by wake turbulence from a larger aircraft, the
position, altitude and direction of flight of larger aircraft
followed by the phrase "caution - wake turbulence."  Whether or
not a warning has been given, however, the pilot is expected to
adjust his/her operations and flightpath as necessary to preclude
serious wake encounters.  The following vortex avoidance
procedures are recommended for the situation shown:

a.  When landing behind a larger aircraft - same runway
(figure 10), stay at or above the large aircraft's final approach
flight path -- note touchdown point -- land beyond it.

b.  When landing behind a larger aircraft - when parallel
runway is closer than 2,500 feet (figure 11), consider possible
vortex drift onto your runway.  If you have visual contact with
the larger aircraft landing on the parallel runway, whenever
possible, stay at or above the large aircraft's final approach
flightpath -- note his touchdown point.

h.  Departing or landing after a larger aircraft executing a
low missed approach or touch-and-go landing.  Because vortices
settle and move laterally near the ground, the vortex hazard may
exist along the runway and in your flight path after a larger
aircraft has executed a low missed approach or a touch-and-go
landing, particularly in light quartering wind conditions.  You
should assure that an interval of at least 2 minutes has elapsed
before your takeoff or landing.

i.  En route VFR - (1,000-foot altitude plus 500 feet).
Avoid flight below and behind a larger aircraft's path.  If a
larger aircraft is observed above on the same track (meeting or
overtaking), adjust your position laterally, preferably upwind.

10.  HELICOPTERS.  A hovering helicopter generates a downwash
from its main rotor(s) similar to the "prop wash" of a
conventional aircraft.  However, in forward flight, this energy
is transformed into a pair of strong, high-speed trailing
vortices similar to wing-tip vortices of larger fixed-wing
aircraft.  Pilots should avoid helicopter vortices since
helicopter forward flight airspeeds are often very low which
generate exceptionally strong vortices.

11.  JET ENGINE EXHAUST.  During ground operations, jet engine
blast (thrust stream turbulence) can cause damage and upsets if
encountered at close range.  Exhaust velocity versus distance
studies at various thrust levels have shown a need for light
aircraft to maintain an adequate separation during ground
operations.

a.  Engine exhaust velocities, generated by larger jet
aircraft during ground operations and initial takeoff roll,
dictate the desirability of lighter aircraft awaiting takeoff to
hold well back of the runway edge at the taxiway hold line.
Also, it is desirable to align the aircraft to face any possible
jet engine blast effects.  Additionally, in the course of running
up engines and taxiing on the ground, pilots of larger aircraft
should consider the effects of their jet blasts on other
aircraft, vehicles, and maintenance and servicing equipment.

b.  The Federal Aviation Administration has established
standards for the location of runway hold lines.  For example,
runway intersection hold short lines are established 250 feet
from the runway centerline for precision approach runways served
by approach category C and D aircraft.  For runways served by
aircraft with wingspans over 171 feet, such as the B-747, taxiway
hold lines are 280 feet from the centerline of precision approach
runways.  These hold line distances increases slightly with an
increase in field elevation.

12.  PILOT RESPONSIBILITY.  Government and industry groups
are making concerted efforts to minimize or eliminate the hazards of
trailing vortices.  However, the flight disciplines necessary to
ensure vortex avoidance during visual operations must be
exercised by the pilot.  Vortex visualization and avoidance
procedures should be exercised by the pilot using the same degree
of concern as in collision avoidance since vortex encounters
frequently can be as dangerous as collisions.

a.  Pilots are reminded that in operations conducted behind
all aircraft, acceptance from Air Traffic Control of traffic
information, instructions to follow an aircraft, or the
acceptance of a visual approach clearance, is an acknowledgment
that the pilot will ensure safe takeoff and landing intervals and
accepts the responsibility of providing his own wake turbulence
separation.

b.  For VFR departures behind heavy aircraft, air traffic
controllers are required to use at least a 2-minute separation
interval unless a pilot has initiated a request to deviate from
the 2-minute interval and has indicated acceptance of
responsibility for maneuvering his aircraft so as to avoid the
wake turbulence hazard.

GROUND EFFECT, HOW IT WORKS:
The wing-in-ground effect prevents the wing from creating lift robbing vortexes
because at extremely low altitude there's no room for them to form and this
generates a cushion of air beneath the aircraft.
The effect is stronger the closer the craft gets to the surface.

Or Place Items that you would like to
Swap for a different Item.

Thereafter all Listing are JUST 25p
No other Fees 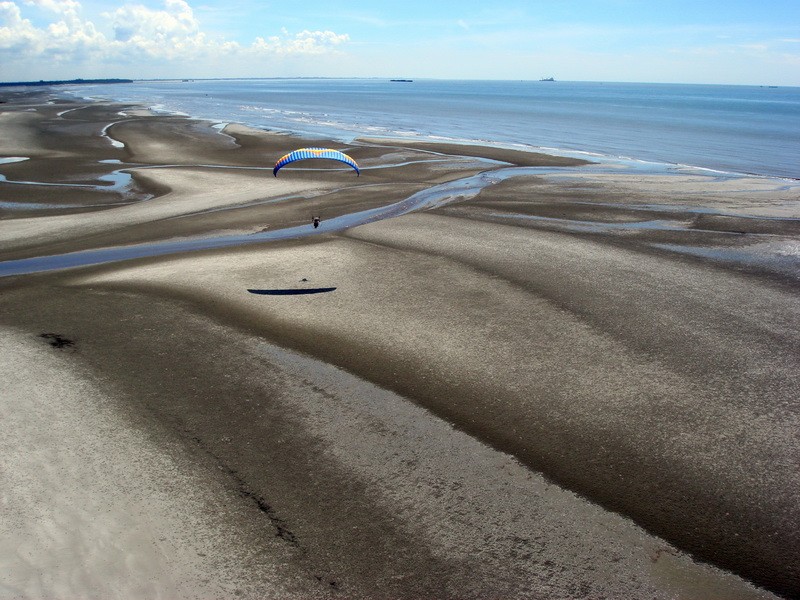 Check Out Our New
UKPPG Webstore at:

Website Content Copyright of WWW.UKPPG.COM All Rights Reserved © You May Not Copy, Reproduce, Nor Extract Information From This Site, Without Prior Permissions.